This page is in need of a cleanup.
You can help by editing and improving the page.

The Earth, its moon and its Martian colonies are under alien attack, but the war against the "Jovian lizards" has, so far, been nothing short of a series of disasters.

Disgusted by the incompetence of Earth's military, the independent arms manufacturer Nergal builds its own space battleship and plans to launch a desperate offensive to save humanity. But due to a shortage of trained soldiers, they've assembled the most unorthodox crew to ever launch into orbit! With a pacifist cook-turned-unwilling mecha pilot and a ditsy admiral's daughter in command, can this unprecedented gathering of geeks, misfits and anime fans prevail against the Jovian menace [2]?

The series features an energetic juxtaposition of comedy and drama, as the characters engage in light-hearted antics in between facing the drama of war. Many of the characters are themselves anime fans, and there is often comparison between the campy, sanitized war of the anime within an anime Gekigangar III and the much harsher reality that the crew of the Nadesico faces. The show intentionally includes a number of science fiction anime clichés, including time travel and alien invaders, but turns these concepts on their heads by the end of the series through a number of plot twists.

The series' music, including the Gekigangar 3 opening, was composed by Takayuki Hattori.

The character designs were by Kia Asamiya of Studio Tron and Keiji Gotoh. Kia Asamiya wrote the Nadesico manga that began serialization in Shōnen Ace a month prior to the anime's debut and ran concurrently with the anime.

There are many anime references, particularly Mobile Suit Gundam and Space Battleship Yamato (The name Nadesico is a play on the phrase "Yamato Nadeshiko", which represents the traditional Japanese ideal of femininity, and also the name of a flower).[3] One of the characters was a magical girl seiyū before joining the crew (and in fact is a parody of seiyū Megumi Hayashibara),[4] another is a fangirl who likes to draw her own shōnen-ai doujinshi, and a third is an otaku who bases his entire life on Gekigangar III.

In an episode late in the series, the ship holds an anime convention complete with a viewing marathon of Gekigangar, people engaged in cosplay, and tie-in merchandising. Another episode makes a parody of the Super Dimension Fortress Macross, as the crew celebrates a Miss Nadesico contest to decide a new captain and public figurehead, where all the female crew members participate. The contest includes a swimsuit competition and singing.[5]

The Gekigangar anime show is in fact an homage and parody of many Super Robot mecha anime of the 1970s and 1980s, most particularly the Go Nagai/Ken Ishikawa collaboration Getter Robo.[6] The battles between Earth and planetary colonies featured throughout the show is a reference to Gundam, while the assortment of odd-ball characters on the ship who prefer to choose their own battles, rather than take sides, is a nod to Captain Harlock. In addition, writers from previous popular sci-fi mecha shows occasionally get announced in teasers for various episodes of Nadesico.

The series originally aired on TV Tokyo from October 1, 1996.

It formerly aired in the UK on the Sci-Fi Channel's pay tv service.

The Martian Successor Nadesico anime was directed by Tatsuo Sato and produced by TV Tokyo, Xebec, and Yomiko Advertising. The series aired on the Bandai Channel and TV Tokyo from November 1, 1996 to March 24, 1997.

On July 1, 2016, Nozomi Entertainment announced that they would release the first region A Blu-ray of the series. It will be available on April 4, 2017.[8] During the availability for pre-order it ranked 13 on Amazon.[9]

On February 1, 2017, Anime Limited announced that they would release the first region ever B Blu-ray of the series in a Ltd Collector's Edition consisting of the television series and Martian Successor Nadesico: The Motion Picture - Prince of Darkness across 4 Blu-rays and 1 DVD for extras including the Gekigangar 3 OVA which has never been released in the UK.[10] The set includes stickers; the Nergal logo, the 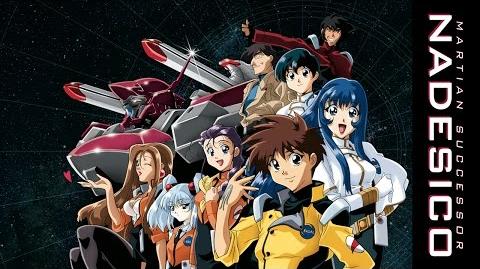 There have been mixed reviews to the series, although most reviews have been positive. One review written when the series was released on DVD gave it average ratings, commenting that whilst the show was dubbed into English poorly, it commented positively on the use of characters saying, "Despite his heroic calling as a robot pilot, Akito is remarkably approachable—after all, what could be more down-to-earth than a cook? Yurika, the world's most unlikely starship captain, may seem like a troublesome ditz at first, but demonstrates resolve and emotional depth as she learns the art of leadership. The characters may be billed as goofballs, but they also provide some of the most touching moments in the show. The Nadesico mindset shows that heroism and self-sacrifice are still respectable virtues, and that nobody needs to hear whining about why you can't or won't pilot a giant robot."[11]

Other reviews have been generally positive, with one saying, "Nadesico is one of those rare series that has something for everyone. Comedy, action, romance, drama...you name it, this series has it (well, almost). What's even more astonishing is that Nadesico keeps everything tied together in a neat little coherent package, so much so that you'll hardly even notice the blend of genres. It's a pretty cool little package, too."[12] Another review praised the English dub, saying "I first watched this show multiple times in Japanese, but eventually gave the English dub a try and found I loved it. The cast is excellent, with Jennifer Earhart's Yurika being especially noteworthy. Even minor characters, such as a Jovian pilot played by Jason Douglas, give great performances. His reading of 'If only the humans appreciated life as we do, I would not have to kill so many of them' is brilliant."[13]

The series quickly became popular. The film won the Animage Grand Prix award in 1998.[1] In other polls conducted by Animage in the same year, Akito was voted the ninth most "Favorite Male Character Of The Year", Ruri Hoshino was voted second and Yurika Misumaru eighth most "Favorite Female Characters Of The Year" and the TV series was vote the third "Favorite Anime Of The Year".[14] In 2005 Anime News Network reported that plans for Nadesico 2 were scrapped, citing an entry on Stellvia director Tatsuo Sato's blog.[15]

Retrieved from "https://nadesico.fandom.com/wiki/Martian_Successor_Nadesico?oldid=8226"
Community content is available under CC-BY-SA unless otherwise noted.